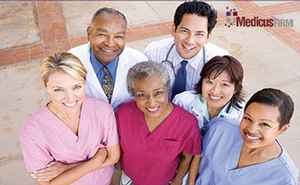 According to the Association of American Medical Colleges, the United States will see a shortage of up to nearly 122,000 physicians by 2032 as the demand for physicians continues to grow faster than the supply. This is because as the population continues to grow, people are taking better care of themselves and living longer than they did in previous generations.

We don’t have to look far to find one answer to this physician shortage. More than 25% of physicians in training or residency are international medical graduates. Many are in the United States on J-1 visas, which are the most common work visas used by foreign born physicians.

There are many misconceptions about physicians on J-1 visas that are keeping employers from utilizing this resource to combat the ongoing physician shortage. Here is a closer look at some of the most common ones:

Physicians on J-1 visas get their medical degrees in their home country before coming to the United States for residency or fellowship. J-1 visa residents practice side-by-side with their American colleagues and have access to the exact same knowledge and resources.

Physicians on J-1 visas train to be understood easily. In fact, many foreign physicians begin working on English communication skills before coming to the United States.

While the J-1 visa does require physicians to return to their home country for 2 years, there are waivers available that allow the foreign physician to stay and work in the United States. The most common option is the Conrad 30 Waiver. Each state has 30 waivers available each year, and they are typically used to help underserved areas. With the Conrad 30 Waiver, an international medical graduate signs a contract to serve at a sponsoring facility no less than three years*. The sponsoring facility then files an H-1B petition with the U.S. Citizenship and Immigration Services (USCIS) to change the physician’s status from J-1 to H-1B, and the physician can begin work. Since as many as 70% of physicians across all specialties change jobs within their first two years**, the 3-year contract with the Conrad 30 Waiver gives these facilities more stability.

The American Medical Association reports that replacing a physician often costs a practice two to three times the annual salary of the physician who left. If your facility must do this in two years or less when a new physician leaves, it can put a huge strain on your budget. Hiring a physician on a J-1 visa with a 3-year Conrad 30 Waiver contract is a safe option that protects your facility from those unexpected costs.

In 2018, 24% of placements made by The Medicus Firm were with international medical graduates. Also, the number of placements filled with physicians on J-1 visas in 2018 was 4.40%, nearly double the number in 2017.

** Leaving so soon? by Today’s Hospitalist